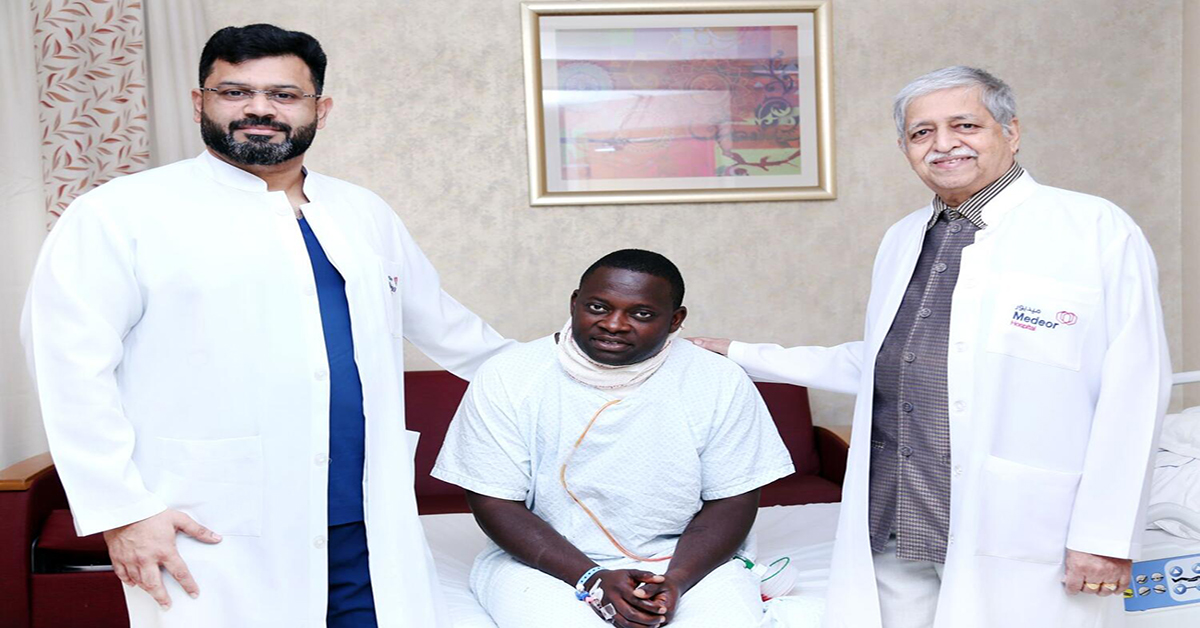 A 38-year-old Gambian would no longer put up with breathing problems and would no longer need to take thyroid gland medications throughout his life after undergoing a two-hour delicate surgery under regional anaesthesia.

Medeor Hospital (Dubai) records identified the recovering patient as UAE resident for eight years Gibril Ceesay, whose eight centimetres X 10 centimetres (cms) thyroid gland enlarged mass – described by specialists as “the size of a small coconut” –had been extracted recently. It was Ceesay’s first surgery. He admitted to getting nervous when informed by Otolaryngology specialist Dr. Kishore Chandra Prasad that the multi-disciplinary team, with Anaesthesiology specialist Dr. Abdul Aneez on board, was going to apply regional anaesthesia requiring him to be awake throughout.

“We did an endoscopy that indicated that overall, there was little space for breathing. Due to the compression, the trachea (windpipe) was very narrow, almost around four millimetres (mm), as we went downwards,” said Prasad.

The head-and-neck surgeon added: “Performing the surgery under general anaesthesia would be challenging as it would be difficult to intubate the patient with such a narrow (windpipe).” Gulf Today learnt the enlarged mass had been submitted to the laboratory for further examination since understanding the nature of the growth had to be fully understood.

Medical records showed Food & Beverage supervisor Ceesay began experiencing neck pains since January this year. He went through sleepless nights due to continuous coughing and breathing problems since May. Interviewed, Prasad, with over 46 years of experience in the UAE, said keeping the thyroid gland healthy means limiting processed food and consuming lots of fruits, vegetables, whole grains, lean protein and of course, iodine.

“Get enough exercise as it can boost one’s metabolism and improve thyroid gland function,” he also said, pointing out that with a healthy thyroid gland, substantial amounts of the Triiodthyronine (T3) and Thyroxine (T4) hormones are produced “for proper metabolic functions.”

According to the Cleveland Clinic website, metabolism is the complex process of converting food and drinks into energy by way of the combination of calories and oxygen for breathing, blood circulation, digestion, cell growth and repair, management of hormone levels, and for the regulation of body temperature.

“The thyroid gland is a butterfly-shaped endocrine gland in the neck that plays a crucial role in regulating the body’s vital functions. It produces the hormones that keep the body functioning normally. It stops producing the right amount of hormones because of hypothyroidism. Symptoms are tiredness, weight gain, thinning hair, and constipation, when the thyroid gland does not make enough hormones. It produces excess hormones because of hyperthyroidism when it is overactive. Symptoms are weight loss, sweating, insomnia, and diarrhoea. The autoimmune condition called Hashimoto’s Disease can affect the thyroid gland and cause hypothyroidism,” Prasad explained. Thus, the required diagnostics on Ceesay’s enlarged thyroid gland mass.

Prasad mentioned goitre, the lack of the mineral iodine and treatable by way of medications or surgery: “It is an enlargement of the thyroid gland. It can be caused by irregular cell growth, changes in the thyroid gland functions and autoimmune conditions like Hashimoto’s Disease.” According to the Medscape portal, global goitre prevalence is between 200 million and 800 million.

On Ceesay’s surgery, Aneez said: “General anaesthesia can compromise the breathing of the patient. Usually, we get two to 2.5 cms of space to intubate. However, in this case, pre-operatively, there was only four mm space, which is very narrow.

“In such a situation, if we opt for general anaesthesia and at any point, if there was a compromise in breathing, it would become life-threatening. If he loses his airway, we would not be able to reach the windpipe to give oxygen,” he also said.

Prasad said the multi-disciplinary team had to ensure that Ceesay remained calm: “The neck is an area with important structures. The patient must be comfortable and breathing properly.”