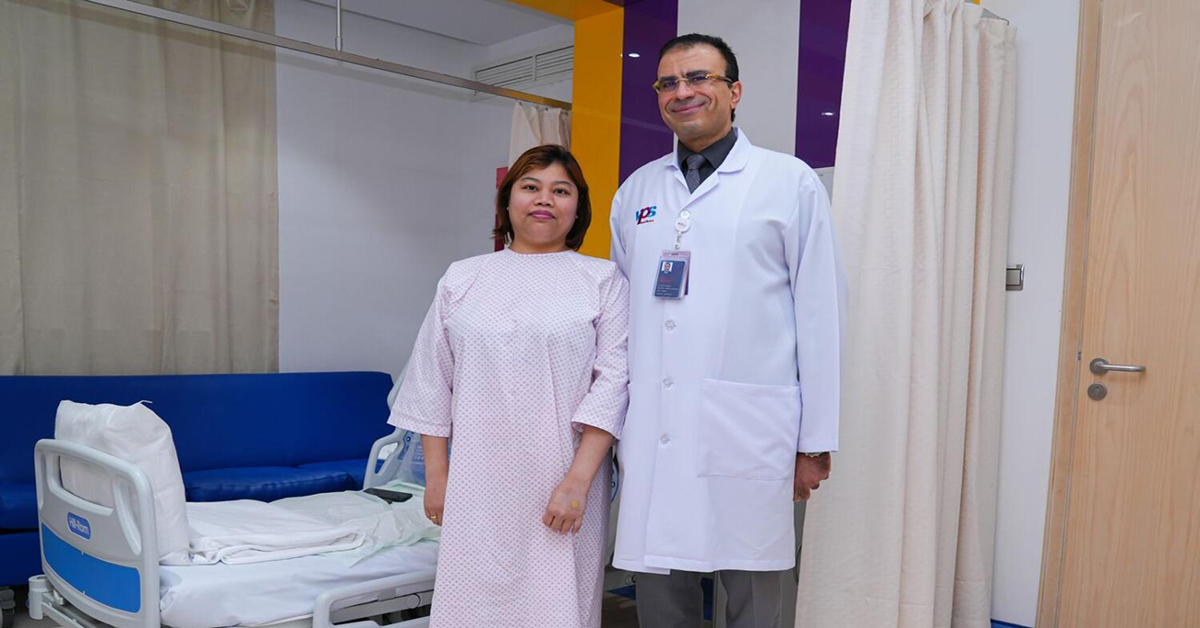 Abu Dhabi-based Filipina expat is relieved after 30 fibroids, ranging from 1cm to 8 cm and weighing 1.5kgs, were removed from her uterus following a complex surgery. The 45-year-old resident now has hope that she may become a mother for the first time after painful experiences in the past. A few years ago, Donna Escarilla and her husband Louie John came to know she was pregnant. However, their happiness did not last long as it turned out to be an ectopic pregnancy – a condition where a fertilised egg grows outside the main cavity of the uterus. The foetus did not survive. The heartbroken couple consulted Dr (Prof.) Walid El-Sherbiny, consultant obstetrics and gynaecology at Medeor Hospital, Abu Dhabi, for treatment. After various check-ups, the doctor found that Escarilla had uterine fibroids.

Fibroids are non-cancerous lesions that grow in a woman’s uterus. They sometimes become large enough to cause extreme pain and heavy periods. In January 2020, Escarilla flew back to the Philippines to look after her mother, who was seriously ill. She spent around two years there. Unfortunately, her mother passed away. At that time, she started having extreme pain and excessive bleeding during her periods.

“I couldn’t bear the pain. It was extreme. I was not mentally well after losing my mother. I wanted to return to the UAE but the pandemic hindered my plans,” she said.

Escarilla wanted to consult Dr El-Sherbiny as he was aware of her condition but with Covid-19 pandemic travel restrictions she couldn’t fly to Abu Dhabi. Meantime, she consulted some doctors there and all of them suggested the removal of the uterus as the only option. But Escarilla wanted to get pregnant and have a happy family life.

“I wanted to meet Dr El-Sherbiny as he knew my medical history. He was very kind to me during the treatment in the earlier days,” she added. Dr El-Sherbiny found that she had severe anaemia caused by excessive bleeding during the periods.

“She was keen to keep her uterus, hoping that she could get pregnant. So I needed to be extremely careful during the treatment and surgery. The surgery was complex and challenging. It lasted for around three hours. We removed 30 fibroids weighing around 1.5 kg,” the doctor said. Dr El-Sherbiny is hopeful that Escarilla would be able to become pregnant as the fibroids are successfully removed.

“Now the hope to become a mother has been revived.” The medical team will offer treatment options to the family in case required. Escarilla is happy with her recovery process, and she hopes to get pregnant and have a child soon.

“Uterine fibroids are now common in many women. Timely diagnosis and treatment are very important. I am lucky that my husband and Medeor Hospital staff supported me mentally and physically during my hard times. Support from family is crucial in this treatment,” said an emotional Escarilla.

According to Dr El-Sherbiny, having fibroids is one of the common problems and it affects around 12 to 25 per cent of women.

“Not all fibroids need to be treated or to be operated on. If there are symptoms, the patient should consult a doctor. Many women do not have any symptoms of fibroids. Only through proper observation and follow-up can we identify it,” Dr El-Sherbiny said, adding that mainly women experience uterine fibroids in their childbearing years, from puberty until menopause.

“Fibroids could be of different sizes. They tend to shrink after menopause and are benign tumours, which means the chance of getting cancer by fibroids is very low,” Dr El-Sherbiny said.

While small fibroids do not cause any symptoms and don’t require treatment, larger fibroids can cause a variety of symptoms such as excessive and/or painful menstruation, abdominal enlargement, urinary symptoms, constipation, pelvic pain, and painful intercourse. Later, it can lead to complications including anaemia, pain, infertility, urinary tract and bowel problems. The causes of fibroids are not known, but there are known risk factors such as obesity and family history. No previous pregnancy, early menarche, and late age for menopause are some of the causes.

“Large or symptomatic fibroids will need active management in the form of medical or surgical treatment. The choice will be tailored depending on the clinical scenario of each case,” Dr El-Sherbiny said.

“Women should do regular check-ups at least once every six months. An ultrasound scan should be done by that time to check if there are any abnormalities in the uterus and ovaries. Also, if any woman in between notices any change, she should take medical advice,” he added.