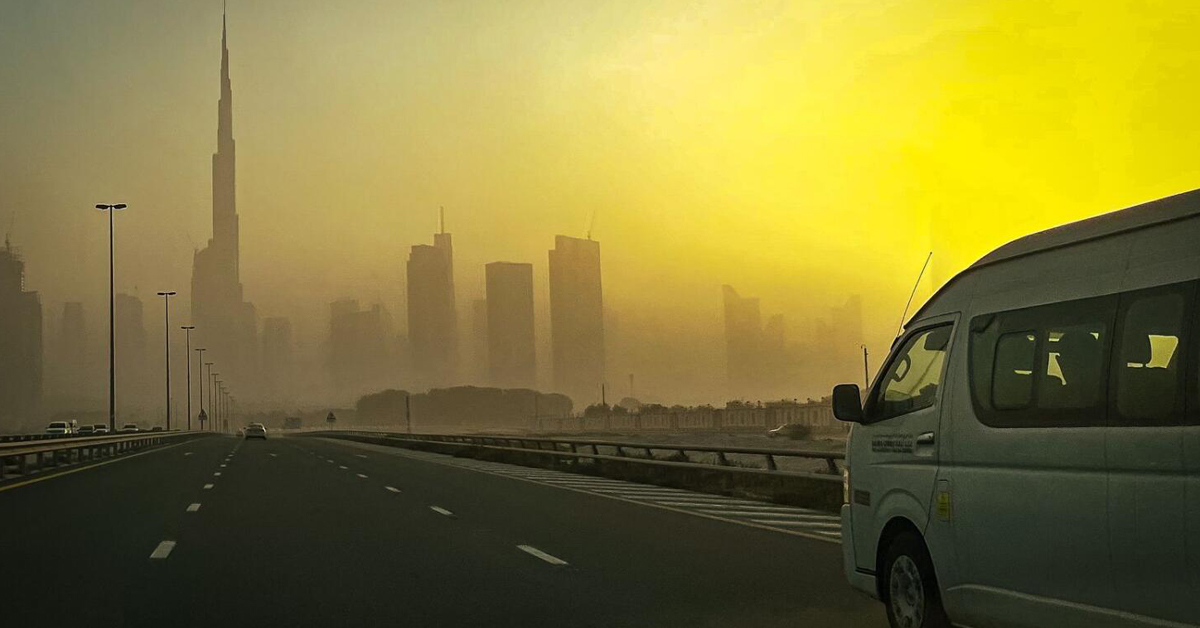 The sandstorm that swept in from the desert and blotted major landmarks in Dubai yesterday continued to blanket the UAE on Wednesday, reducing visibility, and triggering allergies and respiratory disorders among residents.

The National Center of Meteorology said the dust was caused by fresh northwesterly winds with speeds clocking up to 40km/hr until 4pm on Wednesday and rough seas with waves reaching six feet in the Arabian Gulf, until 12 noon on Thursday.

Electronic signs along Dubai highways warned drivers to reduce their speed because of the reduced visibility for the second day.

Sandstorms, also called dust storms, occur when winds strengthen to the point where they’re able to lift the loose top layer of sand off the ground and blow them through the air. The wind can take the sand particles along thousands of kilometres.

Why are sandstorms common in the desert?

Sandstorms are common in desert or semi-arid regions, especially during the summer because of the widespread abundance of loose sand.

Forecasters say most of the dust storms that reach the UAE originate in the dried-up marshlands of Kuwait or Iraq, but usually blow themselves out before they reach here.

How big can a sandstorm be?

The size of a sandstorm depends on the strength of the wind. It’s typically 50 feet tall with wind speeds of 25-30 km/hour, however in rare cases they can be up to 100 kilometers wide and several kilometers high. The particles of sand and dust in a sandstorm are between 0.08 mm and 1 mm in size.

A shot from Hollywood spy thriller Mission Impossible: Ghost Protocol shows a blinding sandstorm engulfing Dubai during a chase scene featuring Tom Cruise. However meteorologists in Dubai say the storm shown in the movie is unlikely to occur in Dubai.

What was the worst sandstorm ever?

The worst sandstorm in history occurred in the US on Sunday, April 14, 1935, when a thousand mile-long black blizzard covered the Central Plains making eyewitnesses believe the world was coming to an end.

The storm came to be known as Black Sunday.

In fact, the term Dust Bowl was also coined around that time when an AP reporter used it to describe aftermath of the horrific dust storm.

What are the main hazards of a sandstorm?

Hospitals and clinics in Dubai said they see an increase in emergency department visits during dusty weather.

How can sandstorms affect our health?

Sandstorms contain dust particles, which can cause severe health issues when they get past our body’s natural defence mechanisms

“Particles in dust storms are usually coarse and hence don’t cause much health issues to the general public but people with a previous history of breathing issues, especially asthmatic and chronic obstructive pulmonary disease, are at increased risk,” said Dr Saheer Sainalabdeen, specialist, respiratory medicine at Medeor Hospital Dubai.

Larger particles can irritate the eyes and upper airways blocking sinuses while small ones can get into the lungs causing irritation and inflammation.

Who is at risk?

Babies, elderly people and people with asthma or chronic obstructive pulmonary disease are at increased risk of developing breathing problems if exposed to sandstorms.

What precautions can be taken during a dust storm?

Stay indoors as much as possible, particularly if you are at risk of health problems, health experts have cautioned. “If you have to go outside, wear a mask over your mouth and nose to prevent you breathing the dust,” said Dr Sainalabdeen.

“Keep the doors and windows shut and stay in an air-conditioned room. When you do go out, you must cover your nose and mouth with a mask. Avoid rubbing the eyes and rinse with water if the eye is irritated, as eye infections are common in this climate,” he added.

Wear goggles when you go outdoors and be extra careful if you use contact lenses. Asthmatic patients should carry their emergency reliever medications with them.